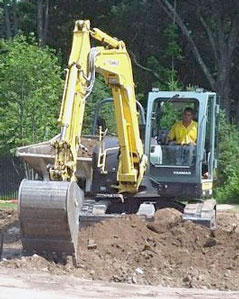 Founder Matthew Staffieri studied at the University of Connecticut in Storrs. While going to school he worked for the University’s grounds and maintenance department. It was also during this time, he completed an internship with the grounds department at The Country Club in Brookline, MA. Unlike most Turf Grass Science majors, he decided to pursue golf course construction rather than the typical path of maintenance. This resulted in an internship with Agri-Scape Golf Course Construction, Inc.

Upon completing his degree with a Bachelor of Science in Agronomy, Matthew accepted a position with Barcellos and Kane Landscape Management. During this time Barcellos and Kane was involved with the building of Boston Golf Club in Hingham, MA, under the direction of architect Gil Hanse. Upon completion of the golf course, Matthew was given the opportunity to join Hanse and operate as an independent contractor. He began working as a project manager and shaper, focusing on constructing bunkers and greens alongside Hanse.

Under Gil’s direction, Matthew worked on projects like the complete renovation of Soule Park Golf Course in Ojai, CA, a public 18-hole course that had been severely damaged by natural disaster. As well as the dramatic changes made to TPC Boston in Norton, MA, for the 2007 Deutsche Bank Championship. He also supervised an extensive tee and green renovation at The Palmetto Golf Club in Aiken, SC, where Hanse currently serves as resident architect.